Clemson built a new tennis facility that opened January 2019 so it's a really nice building with decent lighting.

Walk in the main entrance by the soccer fields and go up the stairs in front of you. Continue straight through the glass doors and you should be in the upper floor of the tennis area with all the fans. There's a staircase on either side of this area and it probably has a barrier in front of it that says "Coaching staff only" or something like that. Just pull out your camera and walk around the barrier and go down the stairs. If anyone tries to stop you, just explain that your with the photography club and that you didn't think there's a media pass for tennis (as of my writing this post there isn't one, don't worry). Throw my name in there if you need, the person helping might know me.

Where you can go

Tennis is possibly the most restrictive sport for photographers. You'll probably get yelled at by someone or asked not to do something - just be humble and do what they say, if it doesn't make sense then ask for clarification. At women's tennis matches there's one crabby old lady referee that will make you move if you're anywhere within 5 feet of her (also she makes really bad calls 1-2 times a day). Anyways!

Green - this is where you're supposed to be.

Yellow - I think theoretically you might be allowed to be there, it just seems awkward because no one else is there and there's nothing to hide behind. You can try it, just accept that you might get yelled at.

Red - don't be here during a match. The players sometimes have to run outside the court to get a ball.

You can't move around very often during tennis. While a match is going on on either side of you don't move anywhere in the red areas in the diagram. So if you need to go from court 2 to court 3, you basically have to wait for the game on court 2 to end (players go to benches to get water) and then walk across the court. If you want to leave to change lenses or go to the bathroom or whatever you need to wait until all the matches between you and the door are done. Typically I'll leapfrog my way across the courts whenever a game finishes.

Let's say you made it to the area between some courts and are ready to take pictures. Now you're in the green area of the picture above. You can usually be anywhere in the green area, but if someone asks you to move then move. Make sure you don't accidentally back up too close to the court behind you - stay in the middle.

Here's a diagram about where you can be with the perspective of outdoor courts. Outdoor courts typically have lots of gates you can go in/out of so it's easier to enter and escape.

Here's what the indoor facility looks like from the end. (It bothers me a ton that the nets on the court aren't lined up with the roof of the building. Also the scoreboards behind the courts aren't centered)

The lighting is even and uniform in the indoor tennis facility so I recommend using these settings for everything:

The settings you'll use for outdoor tennis will vary slightly based on the weather, but here's a guideline:

White Balance: Sunny or Cloudy or Shady (set this manually instead of Auto so that you get a consistent look across all your pictures)

Aperture: f/4 (or whatever your lens can do)

Inspiration pictures courtesy of Carl Ackerman, Daniel Greene, and myself 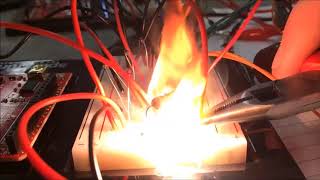